The functionality of the treadmill of Horse Gym 2000 GmbH was tested in a scientific study of 12 young horses. Using a standardized feeding and training program, the muscles and the conditioning of young untrained horses were determined.

The study was conducted in the rehabilitation center of the animal clinic of Dr. Kai Kreling (Weiler) in the period from November 2006 to February 2007. The subjects were 12 young horses of the breed "Deutsches Reitpferd", at the age of 3 - 6 years, ungraited and untrained, coming directly from the pasture.

The treadmill T2 model Ergo-Trotter from Horse Gym 2000 GmbH was used. In this treadmill model, the walking and trotting function can be switched, the max. Speed ​​is 25 km / h, the treadmill is steplessly height-adjustable and equipped with a fully automatic monitoring system.

Condition of the animals

The subjects were given six times a day about 500 g of horse feed, consisting of cereals with a standardized protein content of 12%, as well as Equitop Myoplast, which was fed once during the morning feeding.

In a one-week preparation phase, the horses were accustomed to feeding and working on the Horse Gym 2000 treadmill in walk and trott.

The performance test was performed instead of the normal training program.

body fat composition:
Percent body fat (% BF), determined with the ultrasound device according to Kearns 2002, measured in week 0 and 12.

Use of the Horse Gym

The training of the young undressed horses on the Horse Gym was easy. The horses quickly got used to the treadmill (three days at a time). First in the step but also completely problem-free in the trot; At the end of the adaptation phase, the horses were trained for a short time with an ascending treadmill. In particular, the tread flooring in conjunction with the regular finishes gave the young horses a good feeling of safety, which was reflected in the fact that on the next training day they went back to the treadmill without any problems and completed their training program in good serenity.

The fully automatic monitoring system, which stops the system immediately with some disturbances (tripping, anglacing, shyness) and then returns slowly to the set speed. No technical defects were observed during the entire 12-week period of use of the treadmill. Nor did any of the test horses injure themselves in the use.

The Horse Gym treadmill was used for a total of 390 hours during the entire test run; Of which 230 hours were a strain in the step and 160 hours on a strain in the trot. There were no disturbances either mechanically or electronically. The functionality, robustness and technical features of the Horse Gym T2 fully met the desired test requirements. The treadmill is very sturdy and can withstand the sometimes already stormy demands of young - well-conditioned horses. The tread floor is very resistant and non-slip and shows hardly any signs of wear.

The animal-friendliness of the Horse Gym treadmill was demonstrated by the fact that during the entire test period no horse had to be taken out of the experiment. Although in the performance tests the physical challenge to the young horses was maximized, no lameness or injury occurred during the entire test period. From the test results, it becomes clear that the young horses have already developed an excellent condition after 4 weeks (first performance test). The challenging load on the treadmill (20 min step and 20 min trot at 8% slope) was handled consistently well by all participants. The heart rate doubled to an average heart rate of 74 / min. This is a good value in terms of high physical stress. All blood parameters (lactate and CPK values) were in the physiological range.

With respect to the subjective observation and the externally measurable growth - the musculature - a clear improvement in all horses can be seen in the photos. Over the 12-week period, the neck, back and hind leg muscles developed positively (see picture material). The development of the shoulder muscles is particularly noticeable. Due to the evenly increasing treadmill work, the shoulder musculature developed very well; The higher motion amplitude of the front leg, which was necessary for the incline, increased the amount of muscular circumference on the fore leg, which was significantly measurable.

Positive muscle growth was also observed with the sonographic measurement of the longissimus dorsi, glutaeus and semitendinosus at precisely fixed points at the beginning and end of the test period for all 12 horses. All subjects showed an average uniform muscle growth in the measured muscle groups of approx. 5%. The semitendinosus muscle grew at an average rate of 6.6%.

To what extent the improved conditioning and musculature provides a good basis for the training of young equestrian horses is discussed below. The ground of the Horse Gym provides a good joint-friendly tread safety due to its planar and very tread-like tread rubber. The young horses quickly and easily adapted themselves to the individually adjustable belt speed (step and trot) in a maximum of three days, and responded with movement in high cycle stability; In the event of an anglacing or jumping away, the band stopped immediately and began slowly to develop the adjusted trot speed. Due to the infinitely adjustable treadmill speed of the Horse Gyms, an individual adaptation to the respective anatomical conditions of the subjects was easily possible.

As an essential consequence of the uniform but demanding trappings on the Horse Gym, the young horses quickly showed a liberation which became visible both as inner and outer relaxation. Since the horses were only fixed with the holster on the treadmill, a very positive neck stretching with the desired gymnastization of the back and backhand musculature occurs, especially in the tramping on the slope. This could be achieved without desensitizing the horses in their mouths or with artificial implications (seemingly ridden through the neck) with all their negative effects: firm mouths, narrow necks, fixed back, strength instead of elegance, wear instead of gymnastics Are a good running condition with resulting gymnastics. The muscular system gradually builds up to the positive, which in turn promotes further relaxation and satisfaction. Especially in the tramping on the slope, the horses have to bulge their backs in order to absorb the load with the hind leg.

Sweeping motion sequences are based on the natural forward thrust of the horse, which develops from an active hind leg over a swinging back. Only a good trained and muscular backhand can absorb weight and give the impulse to the forward. By the speed pre-determined by the Horse Gym, even lazy horses have to go diligently without the continuous use of forward-driving aids. There is no desensitization on horseback. Depending on the individual anatomical structure, the young horse can individually build the desired muscle groups. Straightening / balance; Young horses still do not have enough strength in the hindquarters. In the forward movement in the trot, they do not get their forelegs away, especially under the rider, while the hind legs extend far forward. If they are also a little bit oblique, they simply do not have to step into the bales themselves - with the hind leg to the side. In particular, the force for the straightened straight direction must be developed. The greatest misdemeanors for straightening a horse lie in the wrong application of equitable physical strength and violence. You can not pull or force a horse straight. In this way one only achieves tension, the development of the "wrong" muscles, and in the long run more and more the one-sided skew. Due to the lateral limitation of movement at the Horse Gym, the horses have to go under their weight and can not go wide or go wrong. This can be seen, in particular, in the construction of a strong and flexible muscle on both sides. Due to the above-mentioned improvements from the previously performed conditioning, the right approaches have also been created for the positive absorption of the rider's weight. Through the strength and endurance of the hind leg, which allows a positive force transmission over a strengthened back (musculature), the young horse is predestined to build up more bearing and thrust. 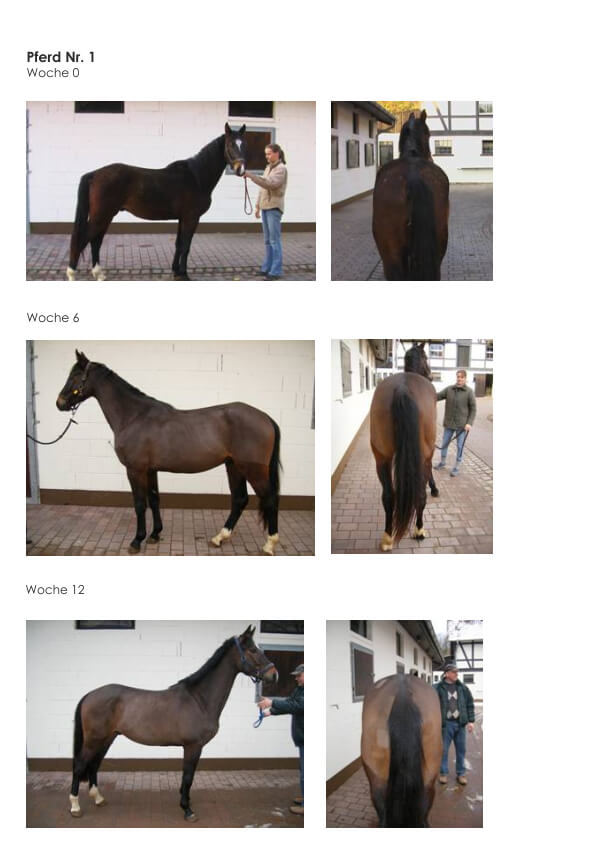 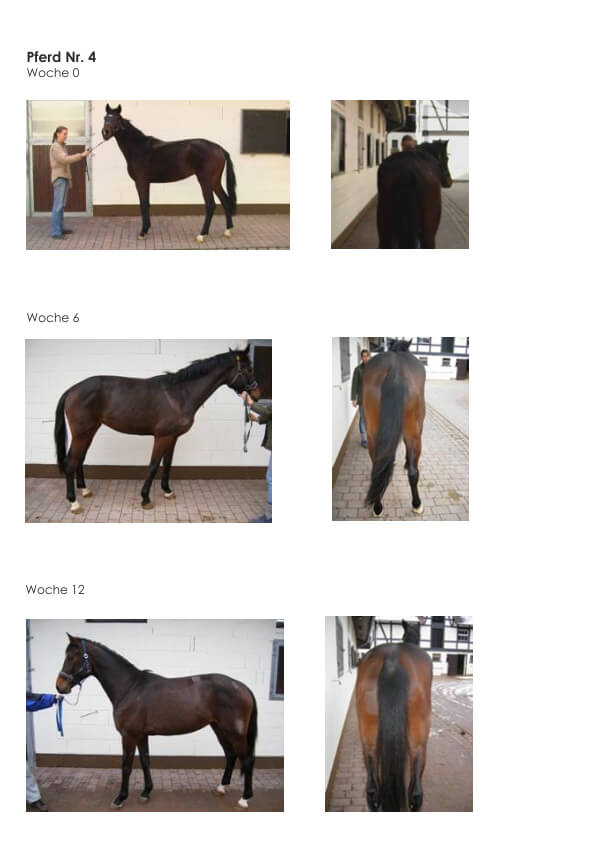 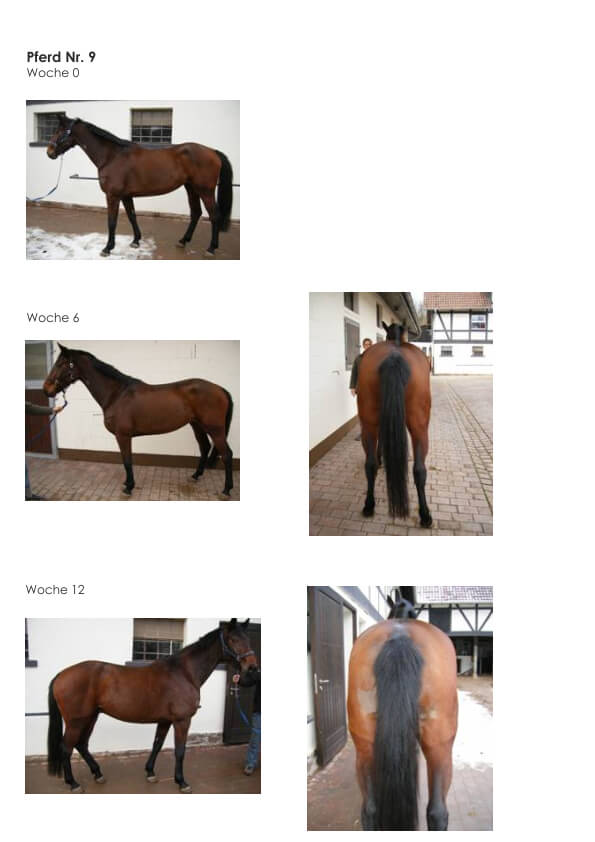 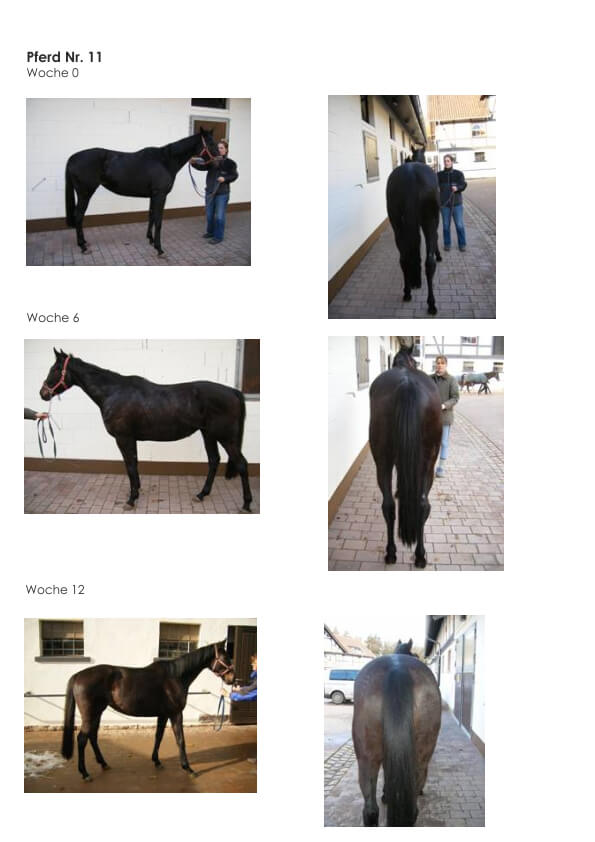 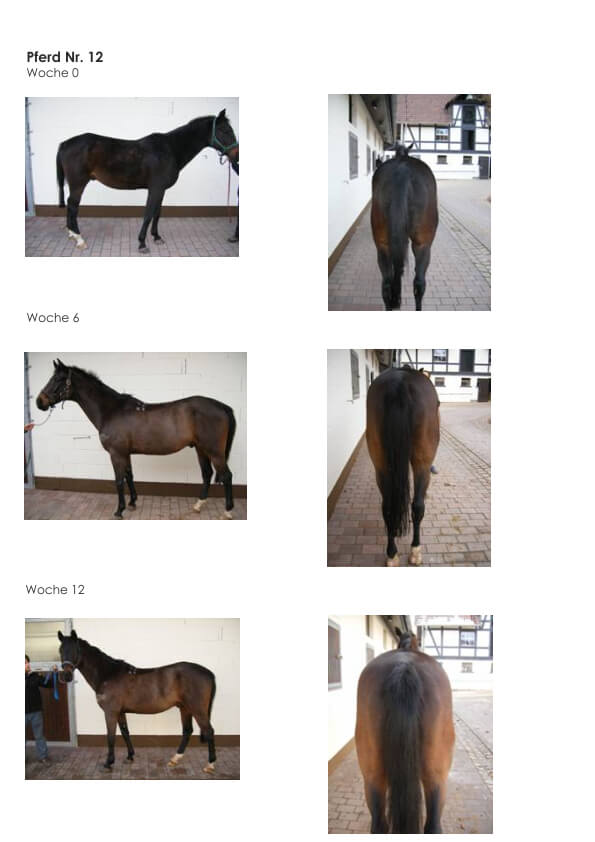